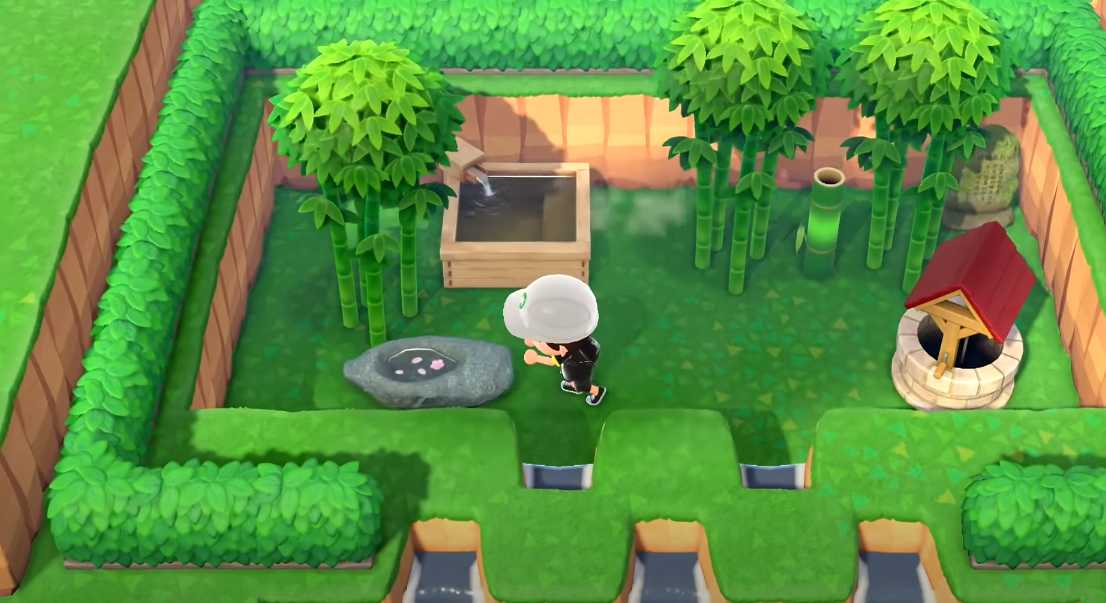 We are taking a look at the best way to create a secret area using a waterfall entrance on your new horizons island.

As you may or may not have heard there is a tiny little glitch in New Horizons that allows you to jump through waterfalls. This is a great opportunity to recreate something straight out of the movies where you can jump through a waterfall to a secret or hidden area. Usually, we wouldn’t talk about glitches but this one doesn’t impact the economy that surrounds the game and certainly doesn’t lead to obtaining any prohibited Animal Crossing bells and items or anything like that. It literally uses the same mechanic that jumps over holes and rivers. Anyway, we’ll be discussing this amazing-looking waterfall entrance that leads to a secret zen-like hidden garden and you can of course only access it by jumping through the waterfall. There are many uses for an area like this you could create a hidden forest full of mushrooms, and trees or a secret hidden library full of books, which would be an awesome place to relax. Or even just a safe place for those valuable items you want to keep hidden from your friends. It will make much more sense as we go we are sure you’ll have way better ideas than mean.

To start, you don’t want a fairly sizable open area to work with, that isn’t on the highest level. This is because you want to build within the cliffs and have some space to add cliffs around the edges of the hidden area on the next layer up. This helps to hide the area from the outside. Of course, there is literally no limit on how big your secret area could be. You could have a tiny little area only a few tiles wide or you could create a large open area and build out an entire landscape, really it’s a personal preference.

The location isn’t too important either, but the first step is to decide what works best for your island by choosing where you want the hidden area to go and how much ground you want to cover. You can go with approximately 9 tiles wide for the hidden area cell on the inside of the cliffs, and we do recommend going slightly bigger though as you want to get a whole bunch of cool items which are crafted with DIY Recipes or buy with ACNH Nook Miles Tickets inside your secret area once it’s finished. Once we find a nice location is simply a case of clearing it and digging out the rough footprint, if you’re starting from flat ground you’re probably going to want to build up the cliffs around the back and sides of the area too. It doesn’t really matter if you get the cliffs exactly right at this point as they can always be changed later

If you’ve opted to hide your secret area within the cliffs towards the back of the map, you’re going to want to decorate the edges of the cliffs which helps to hide what’s going on from an outside perspective. As already mentioned, it’s best if you have the top cliffs all the way around the back and sides of the hidden area, which will not only stop people from gaining access to the area but also stop people from seeing in and help to disguise it. With cliffs, it leaves a one tile gap which we need to fill with either bushes, fences or ACNH furniture or things like that. You can choose the head if it’s your favorite fence type, but we think bushes would look cool too if you don’t mind waiting for them to grow.

Anyway fill in the gap between the cliff and the hidden area, so people can’t walk around the outside you’re basically creating an enclosure. Once that’s done, we’re almost there, to be honest as you can see, we have a nice cutout in the cliff surrounded by a hedge that stops people from accessing it, surrounded by other cliffs which really helps hide it from view.

Cliff the main area dugout is time to build the actual waterfalls, which will eventually be the entrance to the secret area. Here we need to fill in the cliffs along the front which will close off the hidden area. This needs to be exactly two tiles wide, any wider and you won’t be able to jump through the waterfall. Once you’re happy with the size of your area and the front has been closed off it should be pretty difficult to get in and that’s what we won. Next is to position the waterfalls, you can go for three one tile wild waterfalls but really you only need the one in the center with space on either side. While we’re here we can also landscape a bit of the entrance to make it look a bit fancy but digging out some ponds all the waterfalls that we’re not going to be using.

Now that the secret area is pretty much finished and only accessible by the waterfall entrance, you’re going to want to tidy up the surrounding area. For me, I just needed to fill out the remaining cliffs along the top layer to help hide the area even more.  Then is decoration time, I chose to create a nice zen-like garden which will act as a nice little escape on my island. I planted some bamboo trees and placed a bath and some other furniture inside to make a nice and relaxing environment. But you can do whatever you like here obviously.

That’s pretty much it you should now have a nice secret area with a waterfall entrance hidden away somewhere on your island.

How To Get More Twitch Viewers For A Successful Start

Ruby on Rails Blogs You Should Be Following

7 Common Cloud Management Mistakes and How to Avoid Them

A Brief Guide to the Types of CMS